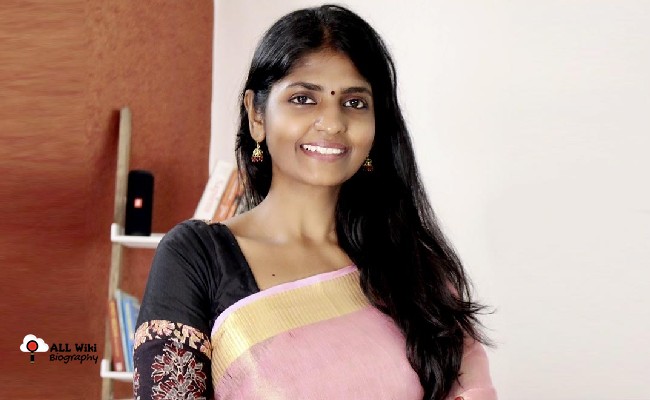 Kani Thiru aka Karthika Agathiyan is an Anchor and YouTuber, who mainly works in the Tamil Industry. She was born on Saturday, May 7, 1994, in Coimbatore, Tamil Nadu, India. Karthika father Agathiyan is an Indian film director, Screenwriter, Producer, Lyricist and Actor and her mother Radha is a homemaker, deceased in 2016.

She has two younger sisters, Vijayalakshmi (Actress) and Niranjani (Actress, Custume designer and Fashion Stylist). She did schooling at Carmel Garden School, Coimbatore and later, finished her degree from Kumaraguru College of Technology in Coimbatore.

In 2008, Kani started her career as an Anchor and worked in Makkal TV for the ‘Sol Vilaiyattu’ show from 2008 to 2011. Kani got married to director Thiru and the couple have two daughters Divya and Tashmai.

She also started her own youtube channel ‘Theatre D’ and gained 534K Subscribers. she used to post videos on ‘Oru Oorula Oru Raja’ with various episodes on Indian history. In 2020, She participated in the ‘Cooku with Comali’ in season 2 and won the title.