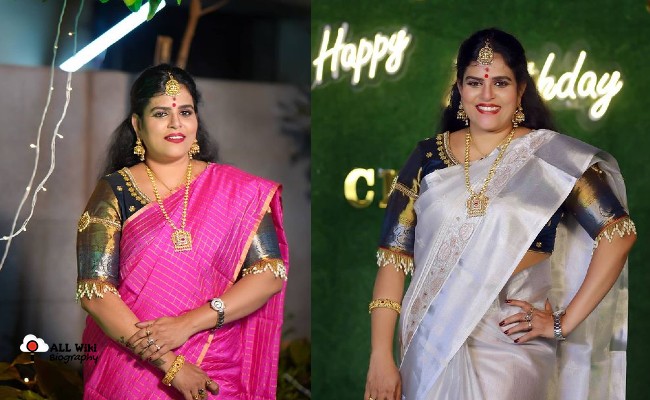 Karate Kalyani is an Indian character actor, comedian and harikatha artist, who mainly works in the Telugu industry. She was born on Monday, 31 October 1977, in Vizianagaram, Andhra Prades, India.

Since childhood, she had a keen interest in singing and dancing. She is also a trained classical singer and performed at different shows.

Kalyani is also a trained Karate player and holds a black belt in it. She has participated in many championships and won many medals in Karate at Goa, Bhubaneswar, and Chandigarh.

Kalyani also holds in the Limca Book of Records for performing Harikatha continuously for 114 hours 45 minutes and 55 seconds. She achieved this feat on 25 June 2015 at Siddhartha Nagar community hall in Hyderabad, India.

In 2001, Kalyani started her career in Telugu Film Industry with the ‘Vechivunta’ show. She then appeared in many super hit movies and gained fame across the Telugu States.

Later in 2013, she started her career in Telugu Television Industry with the ‘Goranta Deepam’ serial. She then acted in a couple of serials like Muthyala Muggu, and Madhumasam. In 2020, She participated in the famous reality show ‘Bigg Boss Telugu 4‘ as a wild card entry and ended at 15th place.