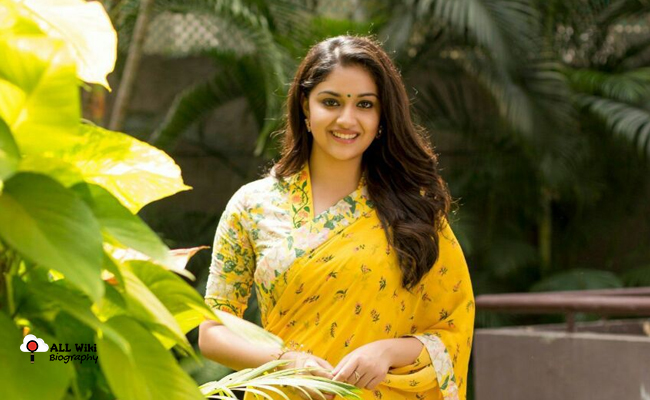 Keerthy Suresh is an Indian film actress, who mainly works in Telugu, Tamil, and Malayalam Languages. Keerthy was born on Saturday, 17 October 1992 to film producer and director G. Suresh Kumar and his wife Menaka (actress).

Keerthy’s Father G. Suresh Kumar belongs to Malayalam Cinema while her mother Menaka is of Tamil descent. During the ’80s, Menaka is one of the highest-paid actresses in South Indian cinema.

Keerthy did her schooling at Kendriya Vidyalaya, Pattom, Thiruvananthapuram. Later joined Pearl Academy, where she completed her degree in fashion design. She also done few movies as child actress in her father’s productions, such as Pilots (2000), Achaneyanenikkishtam (2001), and Kuberan (2002).

In 2013, with “Geethaanjali” movie, Keerthy made her acting debut in Film Industry, in which she had a dual role as ‘Geetha / Anjali’. Next, Keerthy appeared in “Ring Master” (2014) movie, in which She played a blind girl.

In 2015, She made her debut in Tamil cinema with “Idhu Enna Maayam” movie, opposite Vikram Prabhu. In the following, Keerthy made his debut in Telugu cinema with “Nenu sailaja” movie, alongside Ram Pothineni.