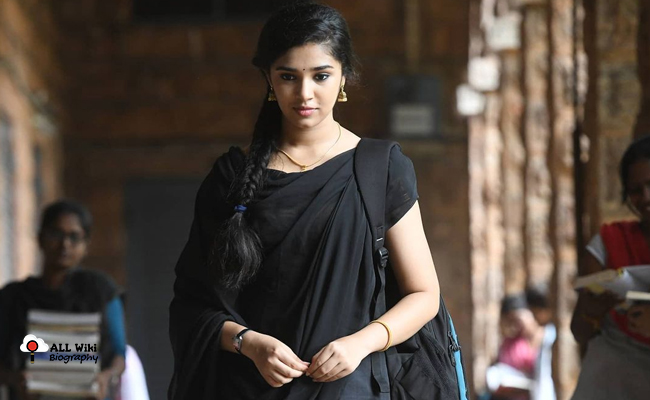 Krithi Shetty aka Advaitha is an Indian Film Actress, who mainly works in Telugu Film Industry. She was born on Sunday, 23 Sep 2003 to Krishna and his wife Neethi in Mumbai, Maharashtra, India.

Krithi pursued a diploma course in drama and she also performed in a play titled ‘Preethi’. Which lead her to seize an opportunity to play the lead role in ‘Sadarame’, all over the state of Karnataka.

Before entering into acting she changed her name to “Advaitha” for numerological reasons but she did not like the way people pronounced the name. she changed her screen name from Advaitha to her original name in 2013.

In 2019, Krithi started her acting career with a small role as a student in Bollywood in the ‘Super 30‘ movie.

In 2021, With the “Uppena” Movie, Krithi made her debut in Telugu Film Industry, in which she played the role of “Sangeetha a.k.a Bebamma”. The film brought huge fame & Recognition and Krithi became an overnight star with this movie.

Even before the release of her Debut Uppena, She also signed a couple of movies like Nani’s “Shyam Singha Roy” and Nikhil’s “18 Pages” movie.