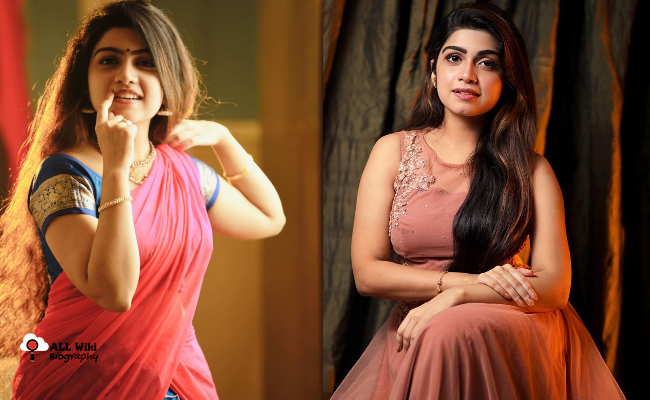 Manasa Radhakrishnan is an Indian Actress, who mainly works in Malayalam and Telugu Languages. She was born on Tuesday 29th September 1998 in Ernakulam, Kerala, India.

Due to her Father Radhakrishnan V.K.’s job, their family moved to Dubai. Manasa did her schooling at The Indian High School, Dubai. Later, Manasa family moved back to India. Manasa then did her intermediate at The Choice School, Kerala.

Manasa next did her B. Tech in Computer Science and Engineering from Muthoot Institution of Science and Technology in Kochi. Since her childhood, Manasa learned Classical dance, Cinematic dance, and guitar.

In 2008, Manasa made her debut as a child artist in Malayalam Film Industry with the ‘Kannuneerinum Madhuram‘ movie. She then acted in a few films like Kadaksham, Villali Veeran, and Paulettante Veedu.

In 2017, Manasa acted in the ‘Tiyaan‘ movie. Since then, She acted in various movies like Kaattu, Crossroad, Vikadakumaran, Sakalakalashala, Children’s Park, Uriyadi, Twenty One Gms, and Paappan.

In 2022, Manasa made her debut in Telugu Film Industry with the ‘High Way‘ movie.