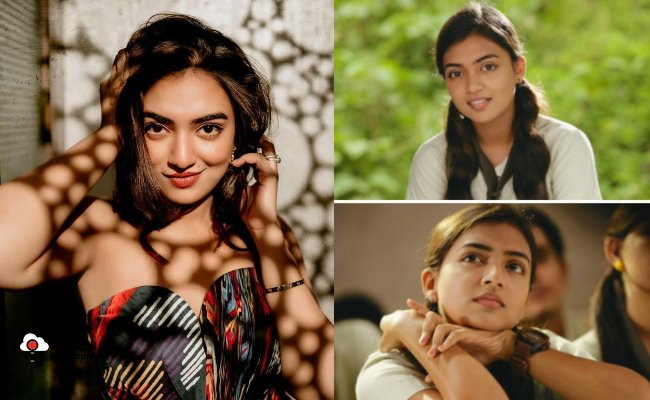 Nazriya Nazim is an Indian film actress, tv host, and producer, who mainly works in the Malayalam & Tamil Languages. She was born on Tuesday, 20th December 1994 in Trivandrum, Kerala, India.

Nazriya did her schooling at Our Own English High School, AI Ain, Christ Nagar School, Thiruvananthapuram and Sarvodaya Vidyalaya, Trivandrum. She then joined Mar Ivanios College, Thiruvananthapuram, but left her college due to tight schedules.

In 2005, Nazriya started her career as an anchor with the ‘Punyamaasathiloode’ show. She then hosted the ‘Munch Star Singer’ show on Asianet TV.

In 2006, Nazriya started her acting career as a child artist in Malayalam Film Industry with the ‘Palunku‘ movie. She next acted in Mohanlal-starrer Oru Naal Varum (2010), in which she played Dhanya, the daughter of Sreenivasan’s character.

She then acted in an album titled Yuvvh by Sony Music Entertainment, alongside Nivin Pauly which became very popular among the youth. Later in 2013, Nazriya played the first female lead role in the Malayalam film Maad Dad.

She then acted in many super hit films like Neram, Raja Rani, Ohm Shanthi Oshaana, and Bangalore Days. In January 2014, Malayalam film actor Fahadh Faasil announced to the media that he was set to marry Nazriya. The pair were engaged in February 2014, before marrying on 21 August 2014 in Thiruvananthapuram.

In 2020, she acted in the film Trance along with her husband after a year break. In 2022, she made her Telugu debut with the film Ante Sundaraniki alongside Nani.