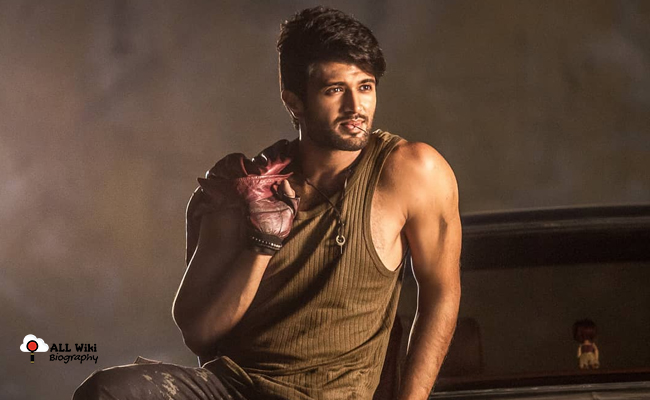 Vijay Deverakonda is a popular Indian film actor, who mainly works in Telugu Film Industry. Vijay was born on Tuesday, 9 May 1989 to Govardhan Rao and his wife Madhavi.

His father Govardhan Rao is a TV serial director and his mother Madhavi is a soft skills tutor. He had a younger brother named Anand Deverakonda. Vijay did his schooling at Sathya Sai Higher Secondary School, Anantapur, and Little Flower Junior College, Hyderabad. He then graduated from Badruka College of Commerce, Kachiguda, Hyderabad, Telangana.

In 2011, with Ravi Babu’s romantic comedy Nuvvila, Vijay made his acting debut in Telugu Film Industry. Later acted in Sekhar Kammula’s Life is Beautiful. In 2015, he got fame after playing the supporting role of ‘Rishi’ in the “Yevade Subramanyam” Movie, which is being directed by Nagashwin.

With the “Pelli Choopulu” movie, for the first time, Vijay played the lead role under Tharun Bhascker Dhaassyam. The movie became commercially successful and also won many awards, which include the Best Feature Film in Telugu at the 64th National Film Awards and the Filmfare Award for Best Film in 2016.

He next acted in ‘Dwaraka‘ Movie in 2017, the film bombed at the box office. Vijay next acted in Sandeep Reddy Vanga Sensational Movie “Arjun Reddy“. With Vijay’s Rocking and Aggressive speech at the pre-release event, the buzz reached peaks.

In the following year, Vijay appeared in a couple of movies like Ye Mantram Vesave and Mahanati. With Mahanati Tamil version, Nadigaiyar Thilagam, Vijay made his debut in Tamil Film Industry.

In the same year, with the “Geetha Govindam” movie, Vijay scored first biggest blockbuster in his career. The film collected more than Rs. 130 Crores Gross and Rs. 70 Crores share at the box-office and become one of the All Time biggest profit earners in Tollywood history.