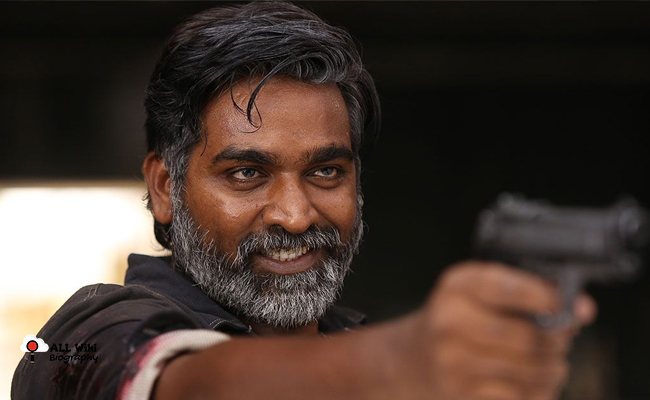 Vijay Sethupathi is a popular Indian film actor, who mainly works in Tamil and Telugu besides a few Malayalam and Hindi language films. He is called “Makkal Selvan” (people’s treasure) by Fans, audiences, and media in Tamil Nadu.

Vijaya Gurunatha Sethupathi Kalimuthu aka Vijay Sethupathi was born on Monday, 16 January 1978 in Rajapalayam, Tamil Nadu, India. His father ‘Kalimuthu‘, was a civil engineer by profession, and his mother’s name is ‘Saraswathi‘.

Sethupathi did his school at MGR Higher Secondary School in Kodambakkam and Little Angels Mat HR Sec School. In 1994, at age 16, he auditioned for a role in Nammavar but was rejected due to his short height.

During his studies, Sethupathi did several jobs like a salesman at a retail store, a cashier at a fast-food joint, and a phone booth operator, as he had to take care of three siblings. He then graduated with a B.com. degree from Dhanraj Baid Jain College, Chennai. Within a week after he graduated, Sethupathi joined in another job as an account assistant at a wholesale cement business.

He later moved to Dubai, as an accountant, during this time he met a woman, Jessie, online. After dating for two years the Couple married on 14 November 2003.

In 2004, Sethupathi made his acting debut by playing the role of ‘Boxing spectator’ in the film, ‘M. Kumaran Son of Mahalakshmi‘. Later acted in several movies like ‘Pudhupettai’, ‘Lee’, ‘Vennila Kabadi Kuzhu’, ‘Naan Mahaan Alla’, and ‘Bale Pandiya’.

With the film ‘Thenmerku Paruvakaatru‘, for the first Setupathi played the lead role. Later acted in series of films like ‘Varnam’, ‘Sundarapandian’, and ‘Pizza’. In 2012, with the film, “Naduvula Konjam Pakkatha Kaanom” Setupathi gained fame by playing the lead role “Prem Kumar” in this movie.