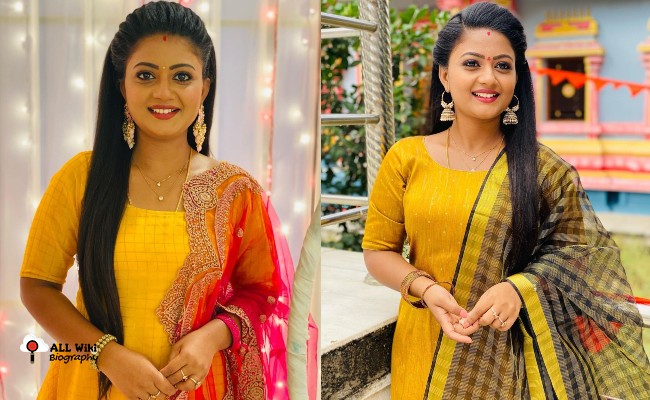 Gomathi Priya aka Priya Balakumaran is a Tamil Actress and singer, who mainly works in the Tamil and Telugu languages. She was born on Monday, 8th February 1993, in Madurai, Tamil Nadu, India.

After her graduation, she got placement on-campus interviews with two offers one in Chennai and another one in Bangalore. She chooses the company in Chennai and worked for some time.

Later, she felt that regular work is not her cup of tea and was attracted to the small screen & silver screen. She then started giving auditions and many people rejected her due to her dusky skin tone.

During this time, She attends auditions for the Oviya serial and after a series of auditions, she got selected for the lead role.

In 2018, She started her acting career in the Tamil Television Industry with the ‘Oviya’ Serial on Colours Tamil, where she played the lead role of Oviya. In 2020, She next acted in the Velaikkaran serial on the Star Vijay.

Later, She made her debut in the Telugu Television Industry with the ‘Hitler Gari Pellam’ Serial. She received significant acclaim for portraying the lead actress role Bhanumathi Abhinav Jagarlamud.

Currently, She was acting in the Siragadikka Aasai serial on Star Vijay, in which, she playing the role of Meena.