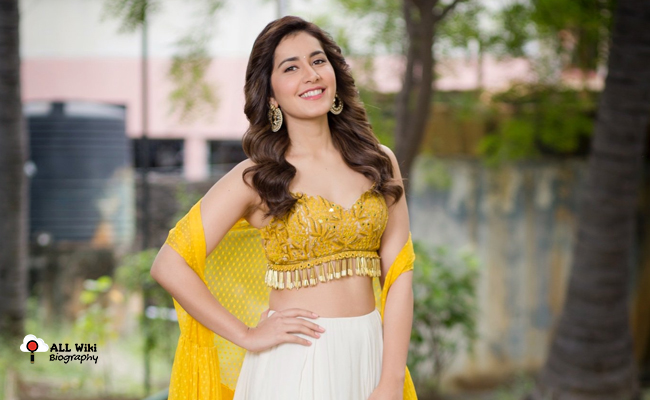 Raashi Khanna is an Indian film actress, who mainly works in Telugu and Tamil Language films. She was born on Friday, 30 November 1990 to Raj K. Khanna and his wife Sarita Khanna. Rashi had an elder brother named Raunaq Khanna.

She did her schooling at St. Mark’s Senior Secondary Public School and graduated with B.A. in English at Lady Shri Ram College, Delhi. During her school days, she wanted to become a singer. Later on, she was more interested in studying and aspired to become an IAS officer.

In 2013, Raashi Made her acting debut with “Madras Cafe” movie in Hindi Cinema, under Shoojit Sircar’s direction, where she played the role of ‘Ruby Singh’, the wife of an Indian intelligence officer portrayed by John Abraham.

In 2014, with Srinivas Avasarala’s directorial debut “Oohalu Gusagusalade” movie, Raashi Khanna made her debut in Telugu Cinema. After this movie release, Raashi got huge offers in Tollywood.

With “Villain” movie, starring Mohanlal and Vishal, directed by B. Unnikrishnan, Raashi made her debut in Malayalam cinema in 2017, where she essayed a cop in the movie. In the same, she also appeared in Gopichand’s Oxygen movie.