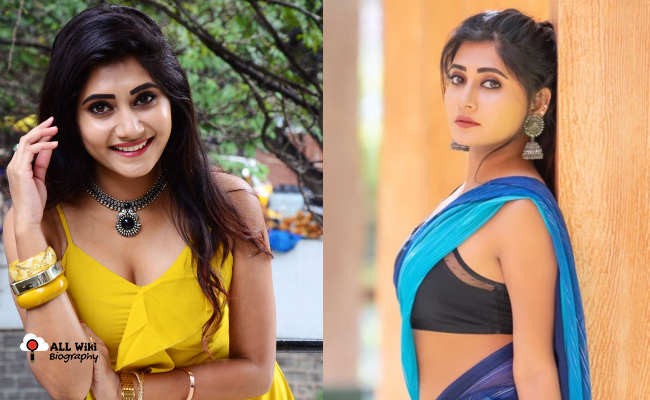 Vasanthi Krishnan is an Indian Film & Television Actress and Model, who mainly works in Telugu Film Industry. She was born and bought up in Tirupathi, Andhra Pradesh, India.

After her Schooling, Vasanthi did her intermediate at Narayana Junior College in Tirupati. Later, the Vasanthi moved to Bengaluru to do an Aviation course. After finishing her education, She settled there.

After her studies, Vasanthi started her career in Modeling. Vasanthi made her debut in Kannada Film Industry and acted in two to three films but those movies did not fare well.

In 2019, Vasanthi made her debut in Telugu Television Industry with the ‘Siri Siri Muvvalu‘, in which she played the role of Krithi. She then acted in a couple of serials like Gorintaku and Guppedantha Manasu (Sakshi).

In 2021, Vasanthi made her debut in Telugu Film Industry with the ‘Cauliflower ‘ movie. Vasanthi then acted in a few movies like Wanted Pandugod, etc.

In 2022, Vasanthi is expected to participate in the famous reality show ‘Bigg Boss Telugu 6‘ which will be aired on Star Maa and Disney Plus Hotstar. Currently, She was acting in the Serial ‘Avunu Valliddaru Ishta Paddaru’ on Star Maa.