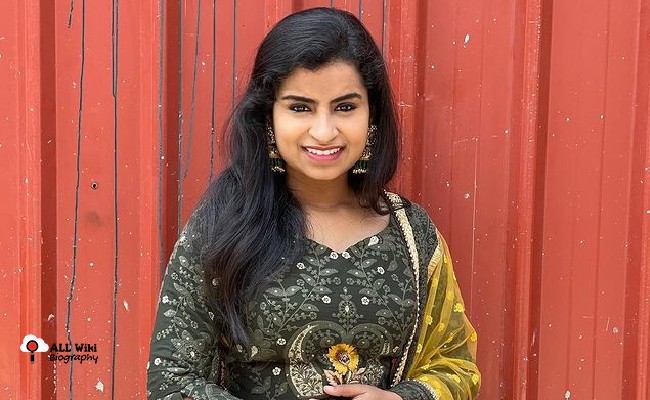 Sivaangi Krishnakumar is an Indian Playback Singer and Actress, who mainly works in the Tamil Film Industry. She was born on Thursday, May 25, 2000, in Thodupuzha, Kerala, India.

Sivaangi father Krishnakumar is Businessman and Musicologist and her mother Binni Krishnakumar is a playback singer. Both her parents received the ‘Kalaimamani’ Award, the highest civilian award in the state of Tamil Nadu.

After Sivaangi was born, her family moved to Chennai. She did schooling at Chinmaya Vidyalaya Matric Higher Secondary School, Chennai and later, finished her degree from M.O.P. Vaishnav College For Women, Chennai.

In 2009, at the age of 9, she started her career in the Tamil Film Industry as a Playback singer with the ‘Anbaale’ song from Pasanga movie. After finishing her studies, she then participated in the ‘Super Singer 7’ and ended at Top 6.

She next participated in the ‘Cooku with Comali’ in seasons 1 and 2. She also won three awards for her participation in this show like The Entertaining Star Female by Blacksheep Digital Awards, Most Popular Female In Reality Television by Behindwoods Gold Icons and Trending Pair Of The Year Award along with Ashwin Kumar Lakshmikanthan for Vijay Television Awards for Cooku With Comali.

Actor Sivakarthikeyan was impressed with her appearance in Cooku With Comali show and cast her in his upcoming movie ‘Don’. She also started her own Youtube channel ‘Sivaangi Krishnakumar’ and gained more than 1.6M subscribers.