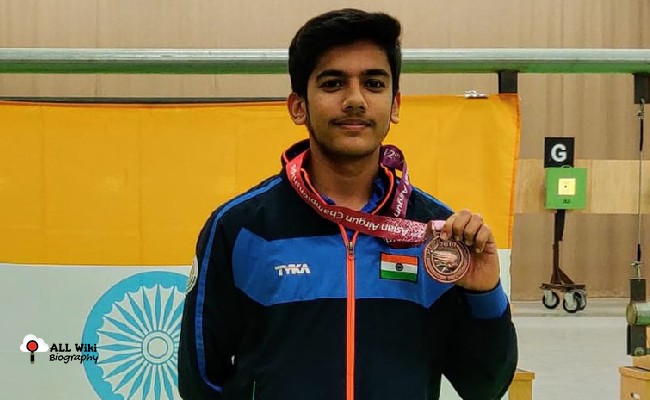 Aishwary Pratap Singh Tomar is an Indian Sport Shooter and He represents India in a 50m Men’s Rifle 3 Position event. He was born on Saturday, February 3, 2001, in Ratanpur, Khargone district, Madhya Pradesh, India.

His father, Veer Bahadur, is a farmer and a landlord and his mother Hema Tomar is a housewife. He has two siblings, 2 elder sisters, Tanvi Ajit Singh Kushwah and Apurva Tomar.

Aishwary developed an interest in shooting after watching the shooting matches of his cousin brother Navdeep Singh Rathore, who is an international level shooter. He learned about shooting from his cousin.

In 2015, Sishwary joined the Madhya Pradesh shooting academy, Rathore in Bhopal and his professional training under Vaibhav Sharma. He was suspended in 2015 to participate in shooting at the national level for a year, due to some technical reasons. He then participated in state competitions and junior nationals and won medals under the guidance of Vaibhav Sharma, between 2016-2018.

In 2018, Aishwary’s shooting began to take a turn after coach Suma Shirur joined the shooting academy and took him under her wings. He then made his international debut at the international meeting of shooting hopes in the Czech republic, where he broke the junior national record by scoring 1173 points and finished at 4th position in 50m air rifle 3 positions event.