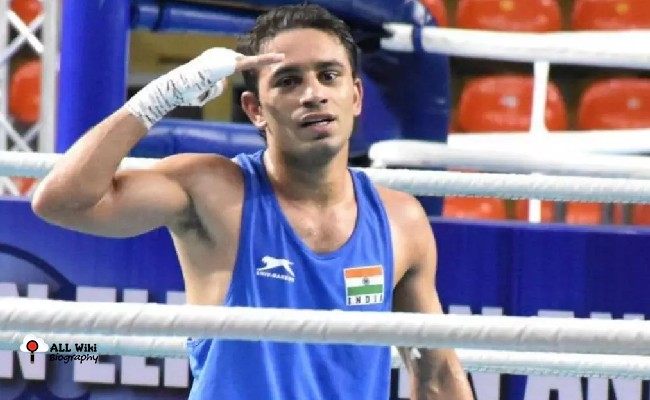 Amit Panghal is an Indian Professional Boxer and He was born on Wednesday, August 16, 1995, in Mayna village, Rohtak, Haryana, India. His father Vijendra Singh Panhgal is a farmer while his mother was a homemaker.

He has an elder brother Ajay Panghal is a former amateur boxer and he currently serves in the Indian Army. Amit was impressed by his brother and wanted to become a boxer but his father can’t afford the training for both sons. Then, Ajay gave up his dream of becoming a boxer and insisted Amit take up boxing.

In 2007, Amit joined Sir Chotturam Boxing Academy in Rohtak and was trained under Anil Dhankar. In 2010, at the age of 14, he won his 1st medal by winning Gold in sub-junior nationals at Maharashtra.

He then moved to Combat Boxing Club at Gurgaon as his coach Anil Dhankar was transferred there. he began to dominate at the junior levels and was promoted to senior-level after his success at the junior level. Amit won the Gold medal in his debut appearance at National Boxing Championships in 2017.

After his stellar performance in the Asian Games 2018, he was nominated for the Arjuna Awards on recommendation by the Boxing Federation of India.

In 2019, He won the Gold medal at Asian Boxing Championship and later in the year, he became the first Indian boxer to win the Silver medal at AIBA World Boxing Championships. In 2020, he then qualified for the Tokyo Olympics after he defeated Carlo Paalam in the 52 kg quarterfinal.

Amit is working as Joint Commissioned Officer in the Indian Army and serving in the 22nd Battalion of the Mahar Regiment.