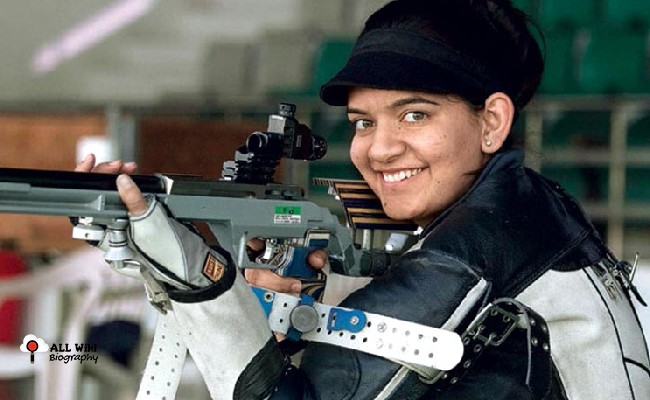 Anjum Moudgil is an Indian Sport Shooter and she represents India in a 20km Race walking event. She was born on Wednesday, January 5, 1994, in Chandigarh, Punjab, India. His father Sudershan Moudgill is a lawyer and his mother Shush Moudgill is a former university-level shooter.

She did her schooling at Sacred Heart Senior Secondary School and later, finished her degree in Sports Psychology from DAV College, Chandigarh.

Anjum mother Shubh joined her at NCC Cadet. She then learned basic lessons for shooting from her NCC’s Unit Commander Colonel Chauhan. Since she hadn’t received any personal training initially, she learned shooting from her seniors at the NCC.

At the beginning of her career, Anjum used to borrow a rifle from the NCC as he didn’t have her own rifle. In 2014, Anjum received her first personal training from coach Deepali Despande after she battled back injuries and inconsistent performances.

She didn’t take shooting as a career seriously until her coach showed faith in her talent. from then she excelled in junior and senior national shooting championships.

In 2016, Anjum won her first international Gold medal at the South Asian Games. Later that year, She won a Silver medal at the World University Games.

In 2017, She won two medals at the Commonwealth Shooting Championships held in Brisbane, Australia, by clinching Silver and Bronze in 10m air rifle and 50m rifle prone respectively.

She then won a Silver medal in 50 m rifle 3 positions at Commonwealth Games 2018. In the same year, he two silver medals at World Championships in 10 m air rifle and 10 m team air rifle respectively.

In 2019, Anjum achieved her highest rank by claiming the world number 2 spot in women’s 10m Air Rifle ISSF rankings. Later that year, Anjum received the ‘Arjuna Award’ from The Government of India.

By winning a Silver medal in 10m air rifle at the 2018 World Shooting Championships, she secures a spot at the Tokyo Olympics 2021. Anjum was supported by Rahul Dravid Athlete Mentorship Programme through the GoSports Foundation.