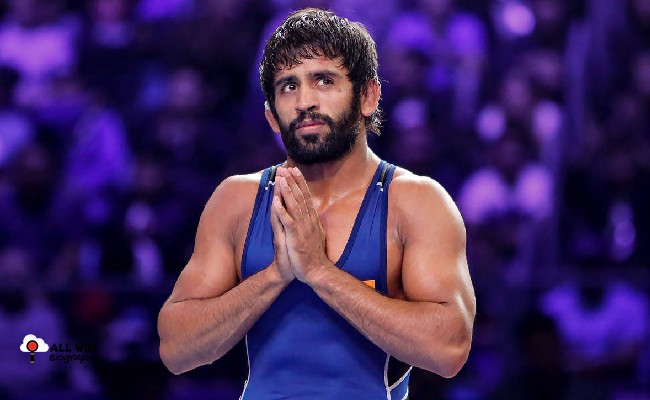 Bajrang Punia is an Indian wrestler and He was born on Saturday, February 26, 1994, in Khudan, Jhajjar, Haryana, India. He comes from a poor family, his father Balvan Singh Punia himself is a wrestler and with his father encouragement, he decided to take up wrestling.

His father joined him at a local mud wrestling school. After sometime, Bajrang’s family moved to Sonepat so that he can get good training at a regional centre of the Sports Authority of India.

In the following year, he won three silver medals, one at the 2014 Commonwealth Games Glasgow, Another one at 2014 Asian Games Incheon and last one at 2014 Asian Wrestling Championships Astana in men’s freestyle 61 kg category.

Two years later, he won his 1st international gold at the 2016 Commonwealth Championship held in Singapore in the men’s freestyle 65 kg category.

In 2017, he won 3 gold medals at the Asian Indoor and Martial Arts Games, Commonwealth Championship and Asian Championships, respectively. He then won a Silver medal at the 2017 World U23 Championships.

After winning the bronze medal at the 2020 Tokyo Olympics:

In August 2021, He won his 1st medal at summer games by winning a Bronze medal at Tokyo Olympic Games.