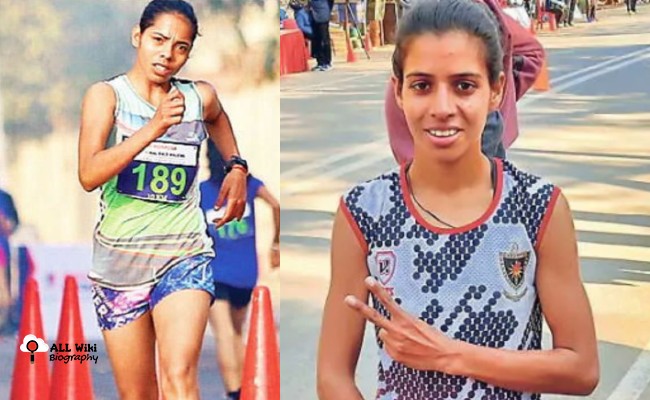 Bhawna Jat is an Indian Race Walker and represents India in 20km Race Walk. she was born on Wednesday, January 3, 1996, in Kabra Village, Rajsamand district, Rajasthan. Her father Shankarlal Jat is a former and his mother Nosar Devi is a homemaker.

She has an elder brother Parkash Jat. She and her family lived in a mud house. In 2009, at the age of 13, Bhawana picked up racewalking and she was encouraged by her PT teacher in school. During this time, her family forced her to quit her studies as they couldn’t afford it.

Bhawna used to wake up at 3 am and start practising on a dirty track near her mud house. Neighbours and Elders in the village discouraged her and asked her to stay at home and do household chores, which but did not bother her.

In 2010, for the first time, she participated in a competitive event at the Rajasthan Athletics Championships 2010 where she represented her school by participating in a 3000m race walk event. She then participated in several district-level tournaments and started winning medals.

In 2016, she joined Indian Railways as a ticket collector to support her family. During this time, she got less time to train as an athlete. She then decided to ask the paid leave for her job but Indian railways stood the condition that paid leave will only be granted if she plays at the inter-railway competition. The reason behind her paid leave was that she has taken a loan from the bank for her elder brother’s treatment of Rs. 2 Lakh.

In 2017, she suffered from typhoid and couldn’t compete in her first game. Later, in 2018, she participated and won a bronze medal. Then Indian railways were granted a year of paid leave to get trained.

In 2019, she won both the inter-railway title and the National open championship. Despite this, she wasn’t given paid leave after that. On the other hand, she can’t take unpaid leave as she had to get trained at Rohtak and need to spend money on accommodation and other living expenses. Finally, she made her decision to head towards Rohtak.

Her other brother is working in Jaipur in a private firm, agreed to help her and assured her sister not to worry. Bhawna’s decision to come to Rohtak was criticized by many.

She then participated in her first senior-level national competition and finished 10th in a 20km race walk with the timing of 1:53.36s. at the 6th National Open Race Walking Championships 2019.

In 2020, Bhawana shattered the national record set by Baby Swomya of 1.30:29s by clocking 1:29.54s at the National Open Race Walking Championships held in Ranchi, Jharkhand. With this feat, She qualified for summer games at the 2021 Tokyo Olympics.

She then joined the SAI Training centre Jaipur, Rajasthan and training under the supervision of Gurmukh Sihag her coach.