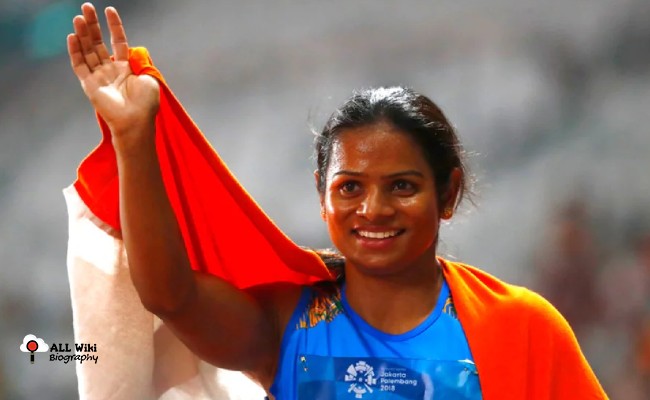 Dutee Chand is an Indian professional Sprinter and she was born on Saturday, February 3, 1996, in Jajpur, Odisha, India. Her father Chakradhar Chand and his mother Akhuji Chand, are daily wage earners by weaving fabrics.

Since her childhood, she was interested and inspired to take up running like her elder sister, Saraswati Chand is a national-level sprinter and currently works with Odisha Police.

In 2006, her father enrolled Dutee and her elder sister Saraswati in a Government Sports Hostel, Bhubaneshwar, where she began to pursue running seriously. Initially, she used to run barefoot while training because of poor financial condition back at home.

In 2014, she won 2 gold medals in 200 metres and 4 × 400 m relays at Asian Junior Athletics Championships held in Taipei, Taiwan. She then dropped from the 2014 Commonwealth Games, due to hyperandrogenism that made her ineligible to compete as a female athlete.

In 2015, She won the case against the International Association of Athletics Federation for its rule on hyperandrogenism in the Court of Arbitration for Sports. The rule prohibited athletes with high testosterone levels to compete in track and field events.

Later in 2016, she then participated in the National Athletics Championships 2016 where she won the Gold medal and sets a new national record with the timing of 11.33s in the 100m event.

She then shattered her own national record by clocking 11.24s in 100m event at the XXVI G Kosanov Memorial Meet at Almaty, Kazakhstan. At the end of the year, she won the Silver Medal and Bronze Medal at the South Asian Games held at Guwahati in 100m & 200m respectively.

She next won the bronze medal in the 200m race with the timing of 23.24s at the Asian Athletics Championships 2019 in Doha. Later, in 2019 at 30th Summer Universiade, she won gold in the 100m race by clocking 11.32s and became the first Indian woman sprinter to win gold at the Universiade.

Currently, She is working as an executive officer at The Odisha Mining Corporation Limited.