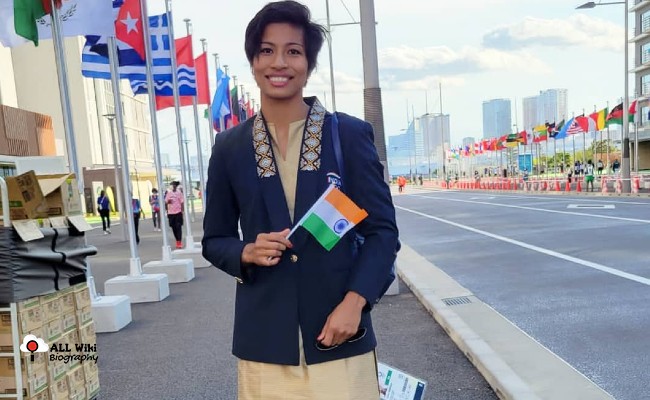 Lovlina Borgohain is an Indian Professional Boxer and She was born on Thursday, October 2, 1997, in Golaghat, Assam, India. Her father Tiken Borgohain is a small-scale businessman and her mother Mamoni Borgohain is a homemaker.

She has twin elder sisters, who were national champions in boxing and this encouraged her to take up boxing. During the trials conducted by the Sports Authority of India, national coach Podum Boro spotted Lovlina’s boxing talent at her school.

She then joined the boxing academy and began her training under Podum Boro. She then participated in the junior and senior national level boxing competitions and excelled well. During this time, she then started her training under the guidance of Shiv Singh, chief coach of women’s boxing.

In 2017, she made her international debut in the 75 kg category and won the Bronze medal at the President’s Cup in Astana, Kazakhstan. In 2018, She then won her first international Gold medal at the inaugural India Open International Boxing held in New Delhi. With this achievement, she was then selected to represent India at the Commonwealth Games 2018.

Later that year, she won a Bronze medal At the 2018 World Women’s Boxing Championships held in New Delhi. Followed by, she won the Silver medal and Bronze medal in the 69 kg category at the Ulaanbaatar Cup in Mongolia and Silesian Championships respectively.

In 2019, she won the Bronze medal at the World Championships held in Ulan-Ude, Russia. In 2020, she then secured her berth at Tokyo Olympics 2020 after winning a bronze medal in the Asia and Oceania Boxing Olympic qualifiers.