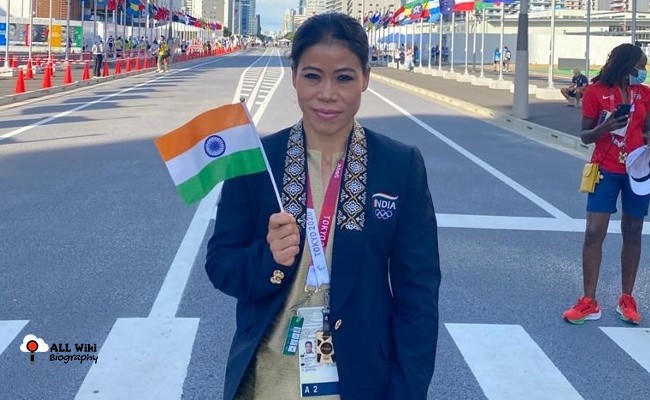 Mary Kom is an Indian Professional Boxer and She was born on Tuesday, March 1, 1983, in Kangathei, Manipur, India. Her father Mangte Tonpa Kom and her mother Mangte Akham Kom Both work in jhum fields.

She has two siblings, a younger sister and a brother. Kom grew up helping her parents in the fields, making charcoal, fishing, cutting woods, and babysitting her siblings. Up to 8th standard, Kom studied in the village school, and later, she moved to Imphal for the 9th and 10th standards. However, when she failed her exams, she dropped out of school.

From a very young age, she was interested in Boxing, at the age of 15, she decided to pursue boxing as a career. She won her first public victory in boxing in the year 2000 when she won the Manipur state women’s boxing championship.

In 2001, she participated in the national games, where she met her husband, Karung Onkholer, who was a law student at the Delhi University where they fell in love and got married in 2005. After marriage, she was blessed with twin boys (2007) and took a break from boxing for some time.

In 2006, She won the gold medal at World Championships held in New Delhi, India. She then took a break for some time due to marriage and In 2008, after resuming boxing, she won the silver medal in Asian Woman’s Boxing Championship.

In 2012, She won a gold medal at the Asian Asian Championships 2012 held in Ulan Baatar, Mongolia. Later that year, she won a bronze medal at London Olympics.

In 2019, she won a bronze medal at World Championships held in Ulan-Ude, Russia. She next won a silver medal at Asian Championships 2021 held in Dubai.