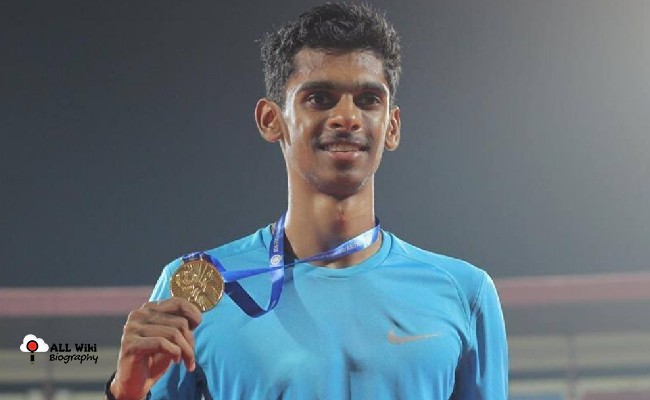 Murali Sreeshankar is an Indian Athlete (Long Jump). He was born on Saturday, March 27, 1999, to S. Murali and his mother K.S. Bijimol in Palakkad, Kerala, India.

His father S. Murali was a Silver-Medalist in the triple jump at the South Asian Games and his mother K.S. Bijimol was an 800 meters Silver-Medalist at the 1992 Asian Junior Athletics Championships. He has a young sister Sreeparvathy, who is also an Athlete (Heptathlete).

In the beginning, he did 50 meters and 100 meters running and was a state-level U-10 champion in these two athletic events. Later, with his father S. Murali suggestion, he switched to long jump at the age of 13.

Murali was funded and supported by JSW Sports and Inspire Institute Sports in Bellary, Karnataka. He is also part of the Target Olympic Scheme launched by the Ministry of Youth Affairs and Sports.

In 2019, Murali won a Gold medal at Tatyana Kolpakova International Athletics held in Bishkek, Kyrgyzstan, by jumping 7.97 meters. Later that year, He won another Gold medal with a jump of 8.00m at the Indian Grand Prix in Patiala, Punjab.

In 2021, He shattered his own national record by jumping 8.26 meters and won the Gold medal at the Federation Cup Senior National Athletics Championships held in Patiala, Punjab.

With this feat, he also crossed the Olympic qualification mark of 8.22m and qualified for his debut Summer games at the 2021 Tokyo Olympics. He is the fourth athlete in the long jump from Kerala since 1972 to qualify for the Olympics.