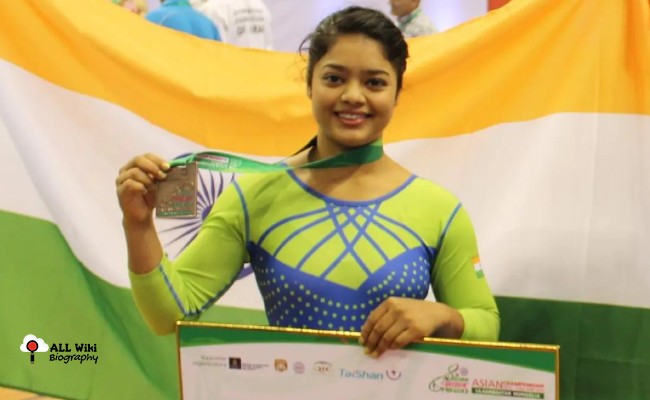 Pranati Nayak is an Indian Artistic Gymnast and She was born on Thursday, April 6, 1995, in Pingla, West Bengal, India. Her father is Sumanta Nayak (Bus driver) and her mother is a housewife. She has two sisters named, Jayati and Tapti.

At the age of 8, Pranati started her training in Gymnastics and her coach Minara Begum took all the responsibilities for her education and other living expenses in Kolkata since her parents were unable to afford it.

After Dipa Karmakar and Aruna Reddy, Pranati is regarded as India’s third major vaulting medalist in the World Championships in gymnastics.

In 2014, Pranati won her first medal at Children’s Asiad in Russia. Pranati, alongside Dipa, made the All-Around finals (4th on Beam and 5th on vault) at the 2014 Asian Games.

In 2019, she earned a bronze medal in the Asian Artistic Gymnastics Championships at Ulaanbaatar, Mongolia. With this medal, She got a job in Indian Railways in sports quota.

In an interview, after winning the bronze medal, She told that her father was a bus driver, her parents did not have a son. And she wanted to make her parent’s life easier in the future by earning and winning more medals for India.