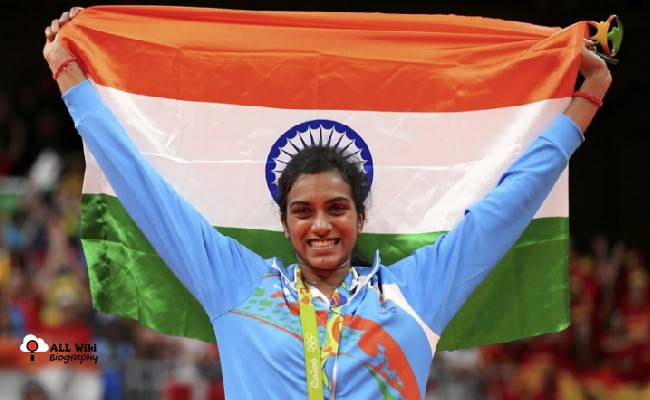 PV Sindhu is an Indian Professional Badminton Player and She was born on Wednesday, July 5, 1995, to PV Ramana and his wife Vijaya in Hyderabad, Telangana, India.

Sindhu parents are erstwhile national-level volleyball players and her father Ramana, received Arjuna Award in 2000. She has an elder sister Divyaram Pusarla is a national level handball player who later became a doctor.

She did her schooling at Auxilium High School, Hyderabad and later, finished her graduation from St. Ann’s College for Women, Mehdipatnam. Despite her parents played professional volleyball, she chose badminton over it because she drew inspiration from her former coach Pullela Gopichand.

At the age of 8, she started playing badminton. She then started learning the basics under the guidance of Mehboob Ali at the badminton courts of the Indian Railway Institute, Secunderabad. After some time, she joined Pullela Gopichand’s Gopichand Badminton Academy.

In 2008, She got her first break by winning the Gold medal in National School Games in the U-14 category. In the following, she made her international debut Asian Sub-Junior Badminton Championships 2009 in Colombo and won the Bronze medal.

In the same year, She made her debut at World Badminton Championship and won the Bronze medal. She became the first Indian women’s singles player and 2nd Indian player(after Prakash Padukone’s Bronze medal back in 1983) to win a medal at the Badminton World Championship.

She then won the Bronze in Women’s team event at the Asian Games 2014. In 2014, Sindhu became the first Indian badminton player to win two consecutive World Championships medals by winning back 2 back Bronze Medals.

In 2016, Sindhu hit the headlines by achieving the feat as she is the youngest and first female woman Olympic Silver-Medalist at the Rio Olympics. Later in the year, she won the China Open title and finished as Runner-Up at the Hong Kong Open.

She next won the Silver medal at the World Badminton Championships 2017, which she won again in the 2018 edition of the tournament. At the Commonwealth Games 2018, she won Gold and Silver in the Women’s Team and Singles respectively in Glasgow.

In 2019, Sindhu created history by becoming the 1st Indian to be Badminton World Champion at the World Badminton Championships in Basel.