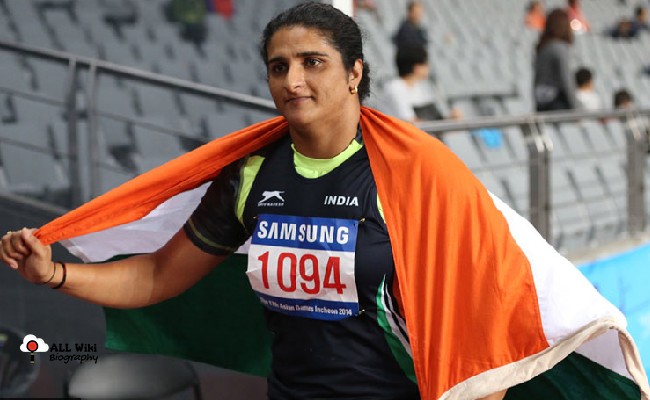 Seema Punia aka Seema Antil is an Indian Athlete (Discus thrower) and She was born on Wednesday, July 27, 1983, in Sonipat, Haryana, India.

She has 2 siblings, two elder brothers, Amitpal and Ananadpan, where Amitpal is a hockey player while Anandapan is a wrestler by profession. She did her schooling at Government School, Sonipat and later, finished her Graduation from Government College, Sonipat.

In 2000, She won her first international Medal by winning gold at the World Junior Championships 2000. Unfortunately, her medal was taken back due to a positive drug test for a banned substance. Two years later, in the same tournament, she won the bronze medal.

In 2004, She made her debut at the Olympics, where she ended at 13th position with a throw of 60.64m. In 2006, She won the silver medal at the Commonwealth Games. She then received Bhim Award from the Haryana state government.

She then opted out of the team for the Games for few years. In 2010, She won the bronze medal in the discus throw with a throw of 58.46m at the Commonwealth Games 2010. she then ended her Olympic tour by finishing at 13th position by throwing at a distance of 61.91m at the 2012 London Olympics.

In 2016, she then appeared in Olympics for the third time and finished 20th with a throw of 57.58m at the Rio Olympics. Seema then won her 4th consecutive medal by winning the Silver medal at the Commonwealth Games 2018.

Later in the year, she won the bronze medal at the Jakarta Asian Games 2018 in Indonesia. In 2021, Seema Punia qualified for Tokyo Olympics 2020 by achieving the qualification mark of 63.50m at the National Inter-State Athletics Championships in Patiala, Punjab.