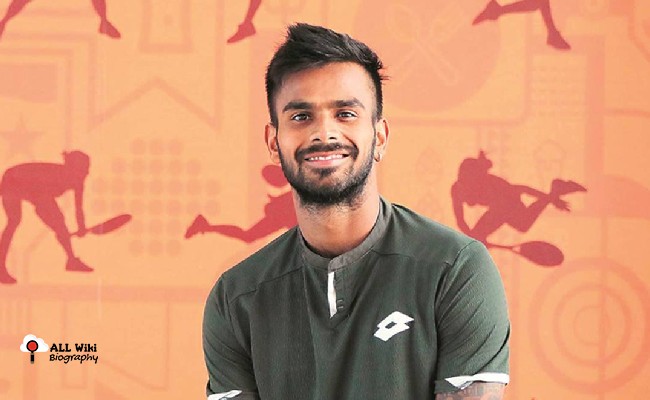 Sumit Nagal is an Indian Professional Tennis Player and He was born on Saturday, August 16, 1997, in Jhajjar, Haryana, India. His father Suresh is a Teacher and his mother Krishna is a housewife.

Since childhood, he used to play Table Tennis and in 2003, his family moved to Delhi. His father Suresh joined Sumit in the Delhi Development Authority (DDA) Tennis Academy to be professionally trained and Sumit won his first tennis tournament at the age of 8.

Later, in 2007, at the age of 10, he was in was inducted into Mahesh Bhupathi’s Apollo Tyres Mission 2018 program, but the programme got shut down after 2 years. In 2010, He moved to Canada for his training and then to Germany, but he continued to receive backing from Mahesh Bhupathi.

In 2015, he won the Wimbledon boys’ doubles title along with Ly Hoang Nam and become the 6th Indian to ever win a junior Grand Slam title. He then turned pro and made his debut for India in the Davis Cup in 2016.

In 2017, Sumit was removed from India’s Davis Cup squad, citing disciplinary reasons. It was alleged that Nagal had been nursing a hangover which caused him to miss a practice session and he also brought his girlfriend to his hotel once without informing the authorities.

Later in 2019, He qualified for the US Open. On 26 August 2019, He made his Grand Slam debut against Roger Federer. In 2020, Sumit secured a berth for his debut summer games at Tokyo Olympics.

At the Tokyo Olympics, Sumit Nagal reached into the 2nd round after defeating Denis Istomin and he was the 1st Indian tennis player in lats 25 years to qualify into the second round of an Olympics tennis event.

Best finish at each of the four Grand Slams: