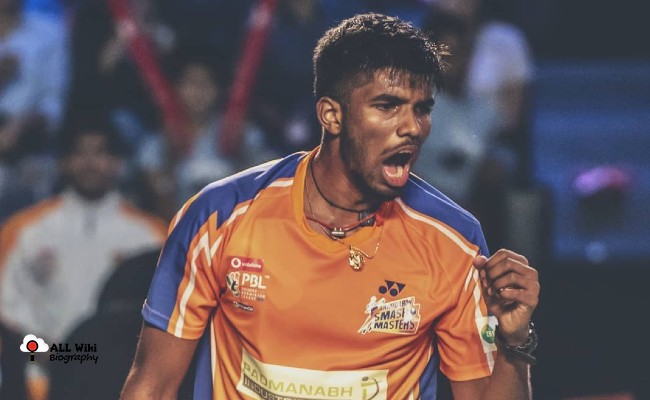 Satwiksai Raj Rankireddy is an Indian Professional Badminton Player and He was born on Sunday, 13 August 2000, in Amalapuram, Andhra Pradesh, India. His father R. Kasi Viswanatham is a Retired physical education teacher while his mother Rangamani is a homemaker.

Raj has an elder brother Ramcharan Rankireddy is also a Badminton Player. He did his schooling at Aditya Public School, Amalapuram and Chaitanya High School, Amalapuram. Currently, Raj is Pursuing Bachelor in Commerce from Andhra Univers­i­ty.

From a very young age, he was interested in badminton and received basic training from his father. He used to practice badminton at the Officer’s Club in Amalapuram and his father Kasi Vishwanath is a President.

In 2014, his father joined him at the Gopichand Badminton Academy and he was trained under former badminton player and national coach Pullela Gopichand. In the same year, at the Sub-Junior Nationals Badminton, he won his maiden national doubles title with Krishna Prasad Garaga in the U-17 category.

Raj next made his international debut at the Asian Junior Badminton Championship 2015 and won his first International Gold medal in the U-17 Boys’ Doubles along with Krishna Prasad Garaga.

He next won his first senior international title at the Tata Open India International 2015 with his mixed doubles partner Kullapalli Maneesha.

In 2017, Satwiksairaj teamed up with Ashwini Ponappa in mixed doubles and won the title at the 82nd Senior National Badminton Championships in Pune. In the same event, Satwiksairaj along with Chirag ended up as runner-up in the men’s doubles category.

Satwiksairaj Rankireddy and Chirag Shetty duo then won the silver medal in a Doubles event, Followed by, Satwiksairaj along with Ashwini Ponappa won the gold medal in Mixed Doubles event at Commonwealth Games 2018 in Gold Coast, Australia.

In 2021, Satwiksairaj Rankireddy and Chirag Shetty duo qualified for their debut Olympics at the 2021 Tokyo Olympics in Men’s Doubles category.